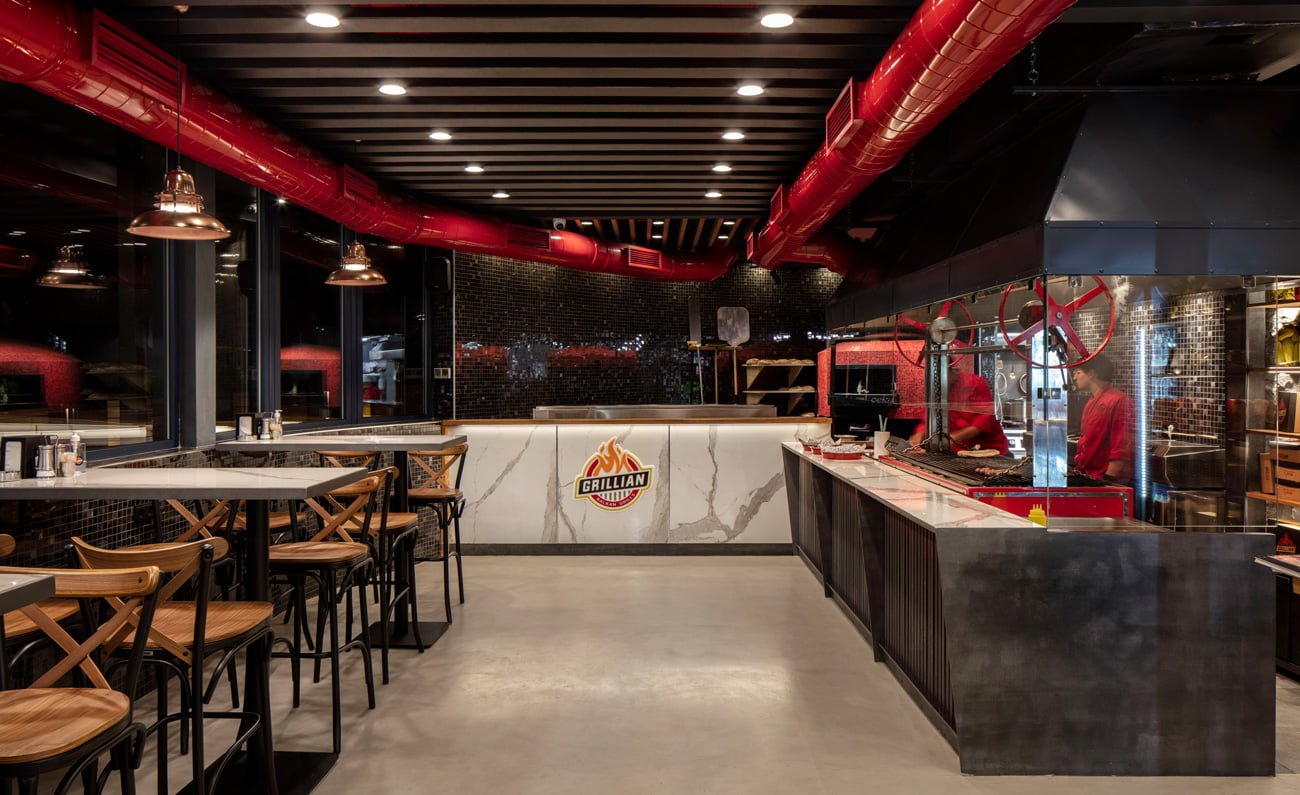 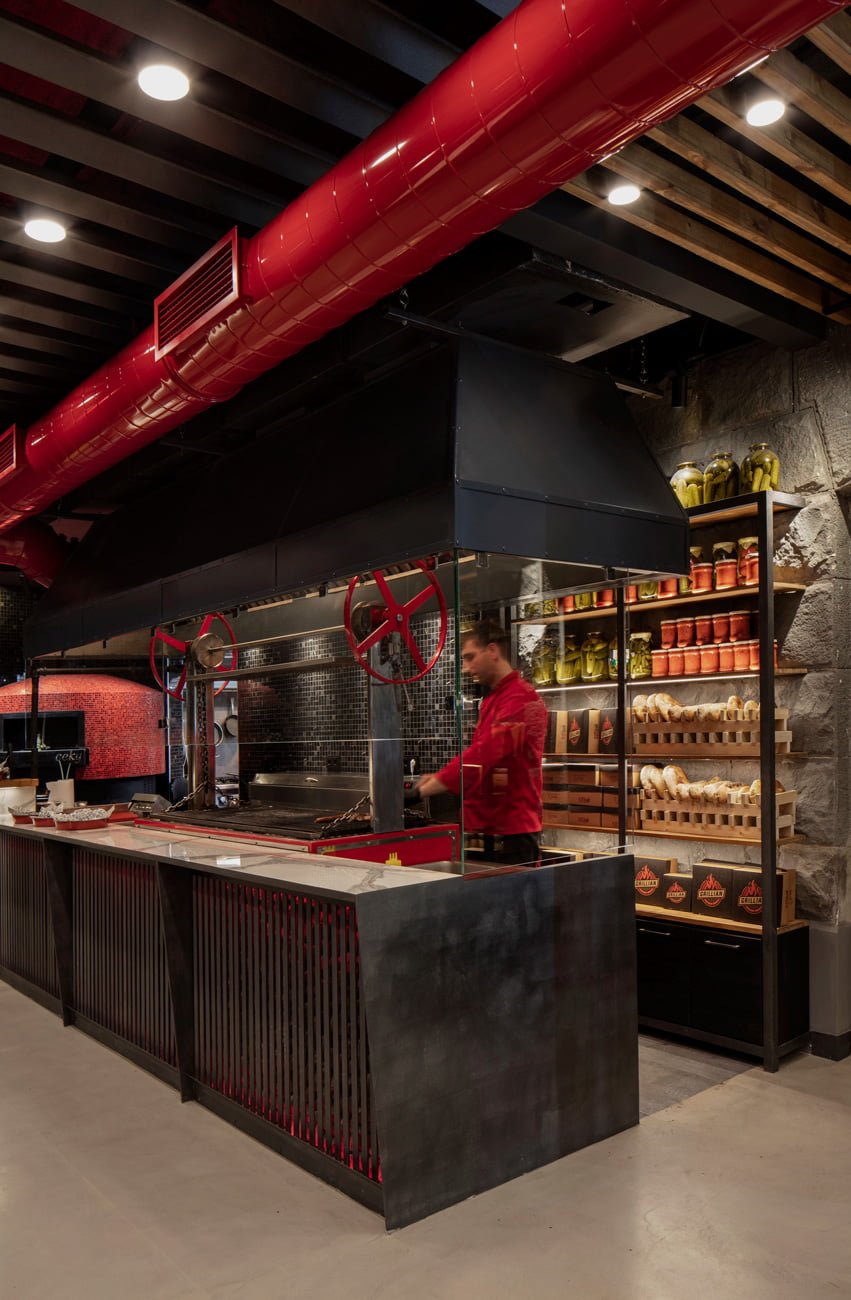 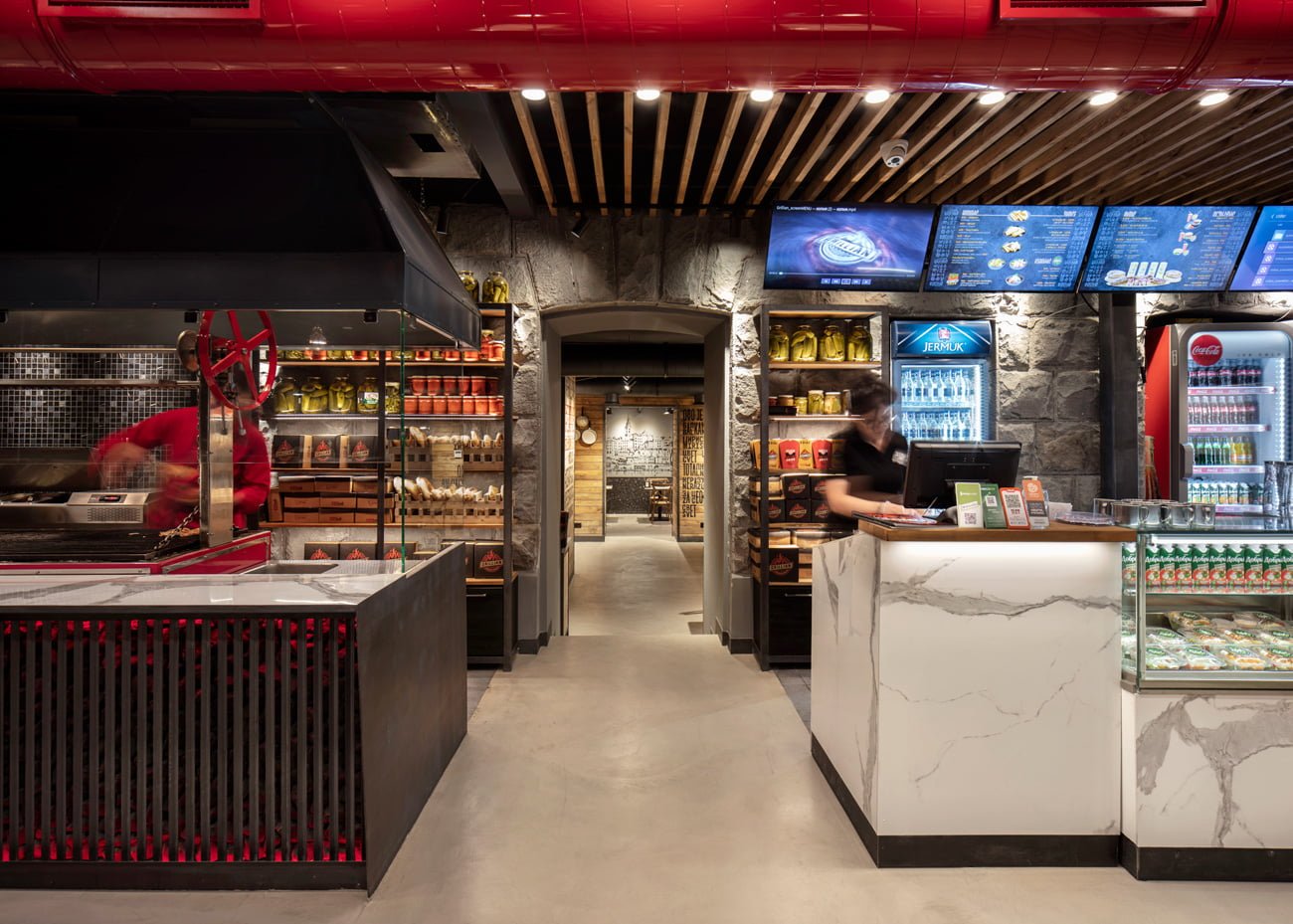 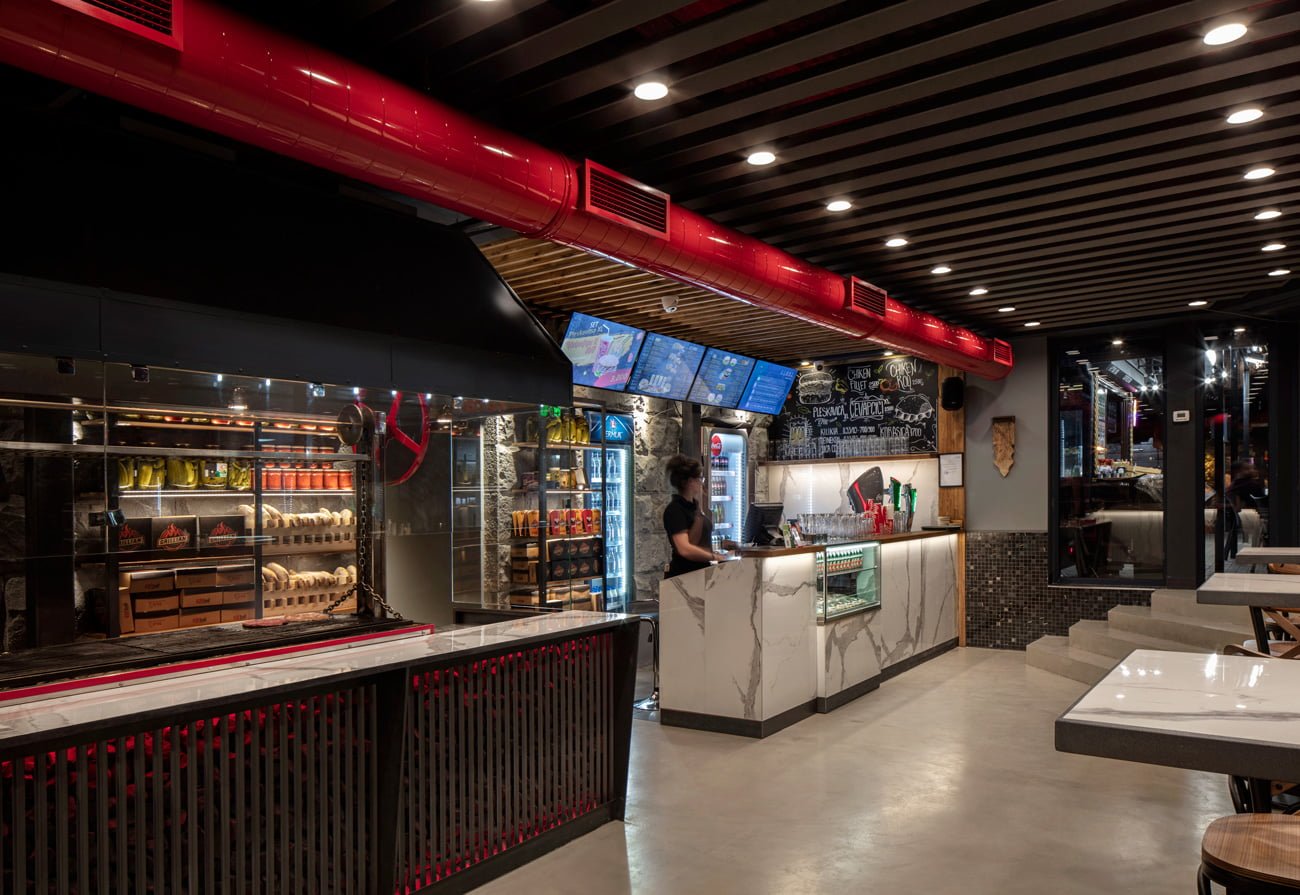 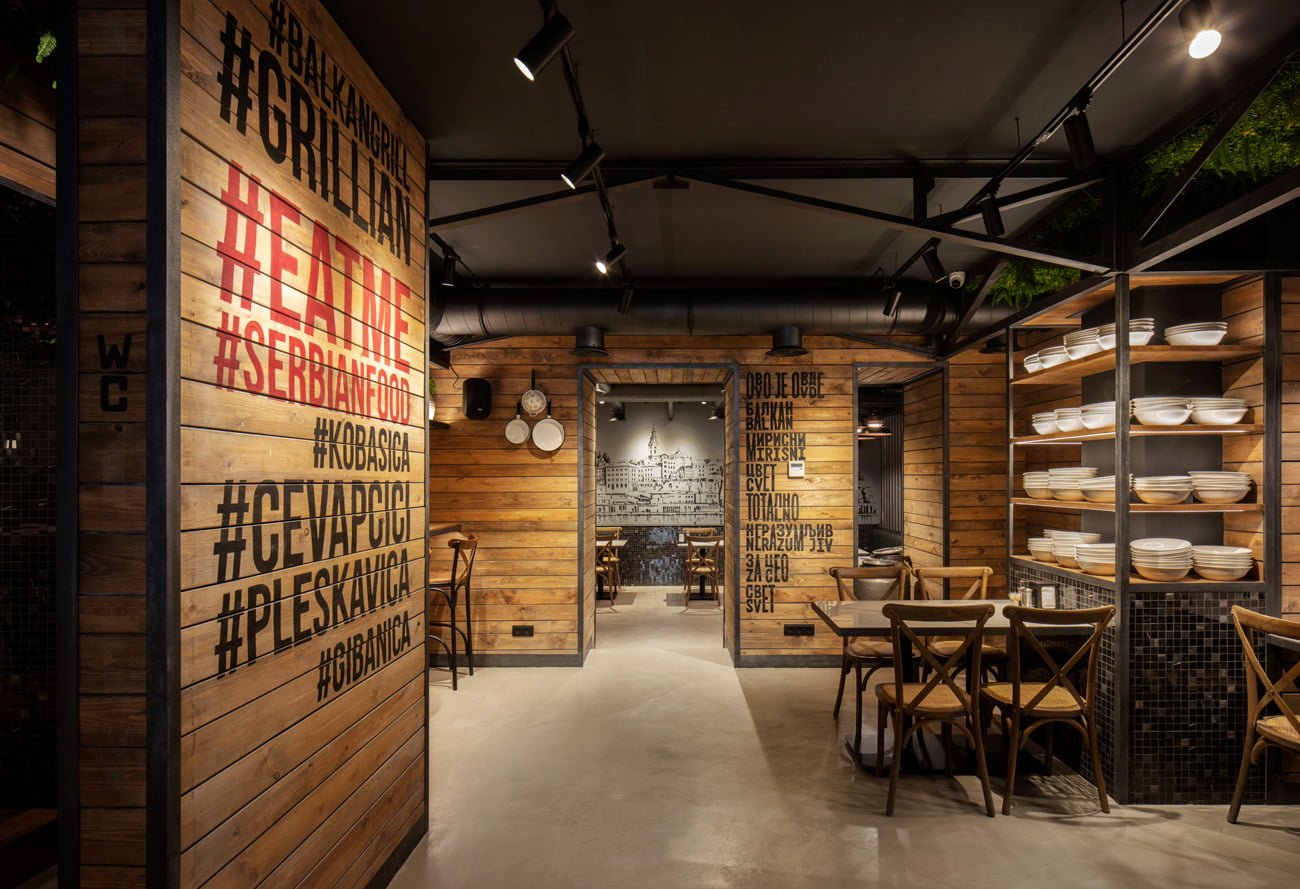 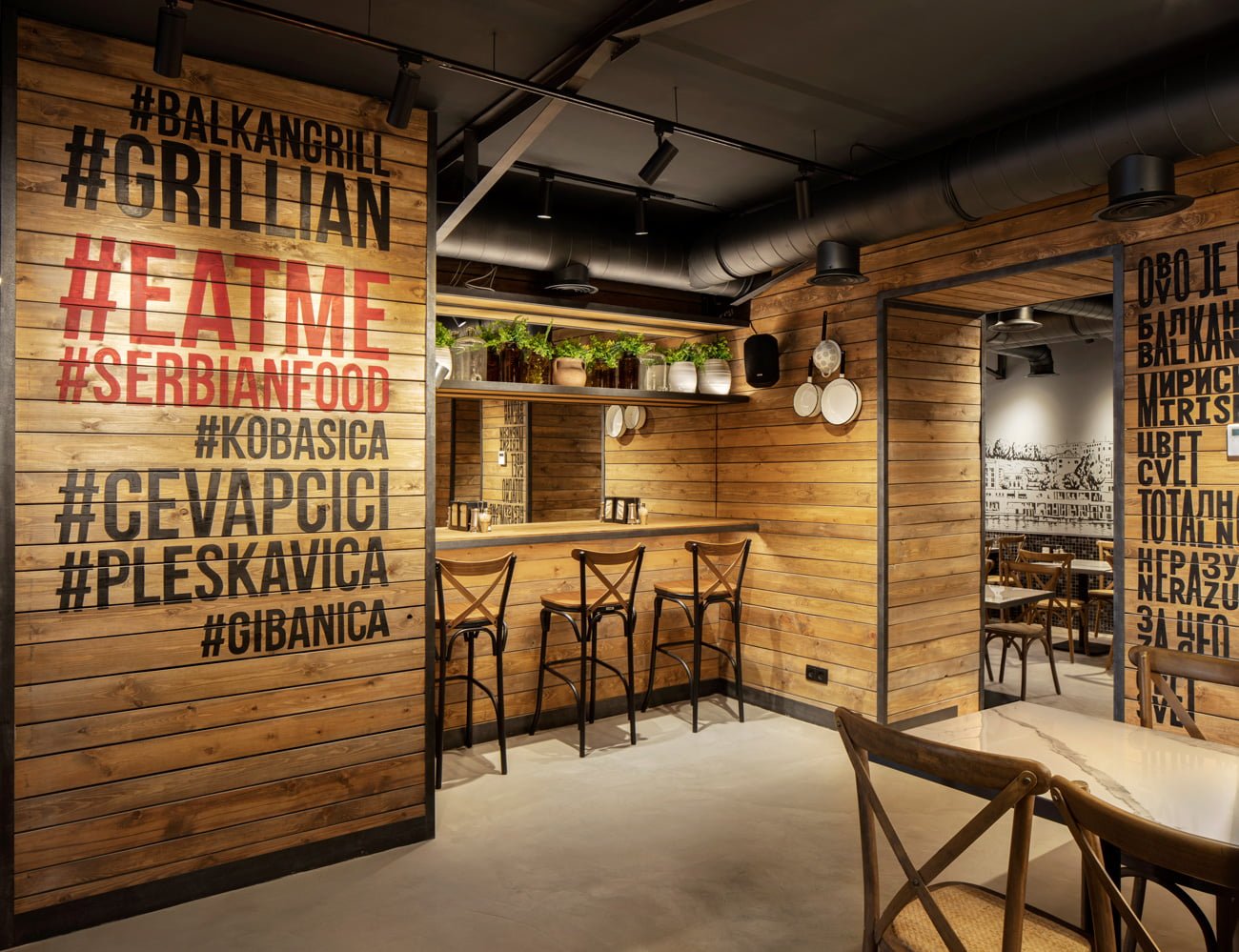 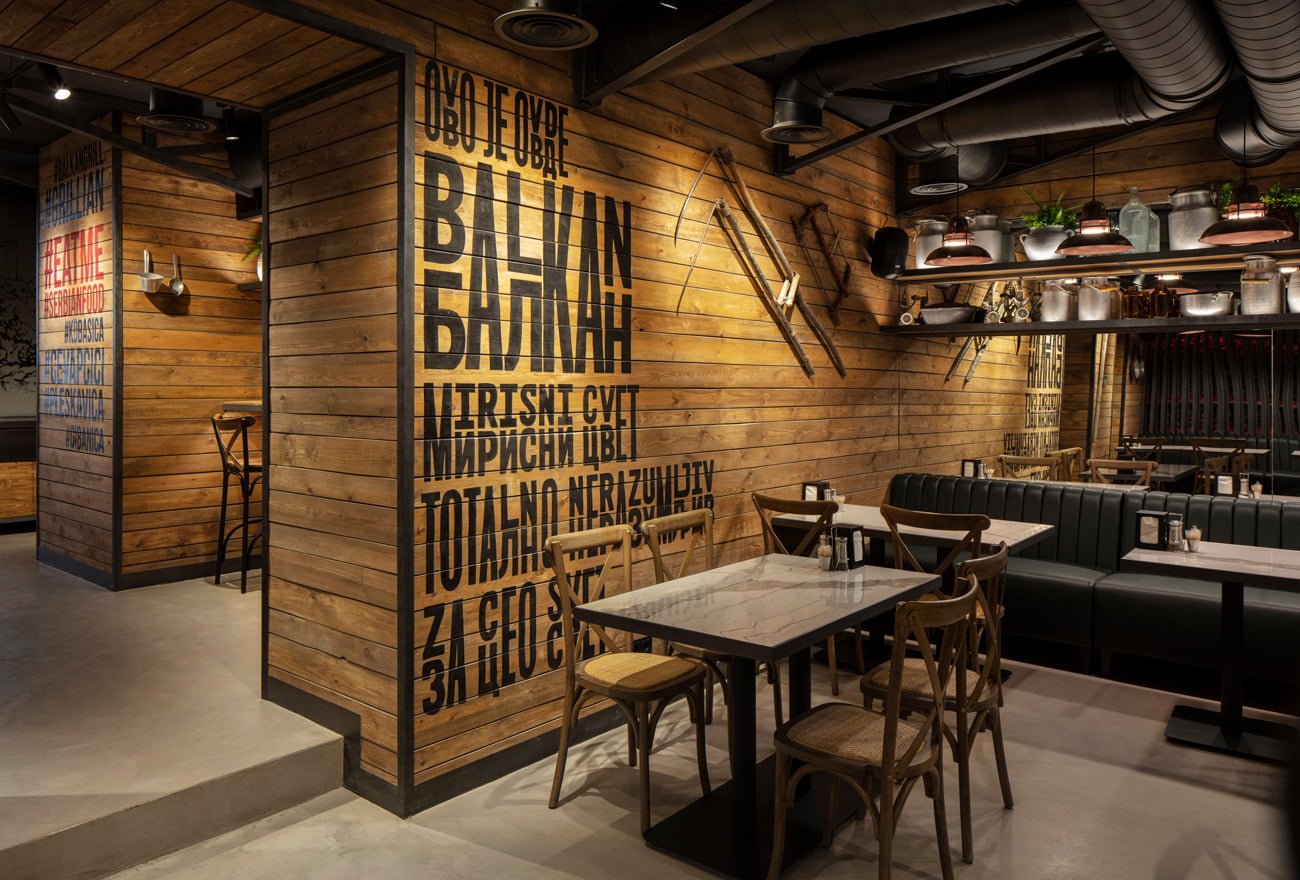 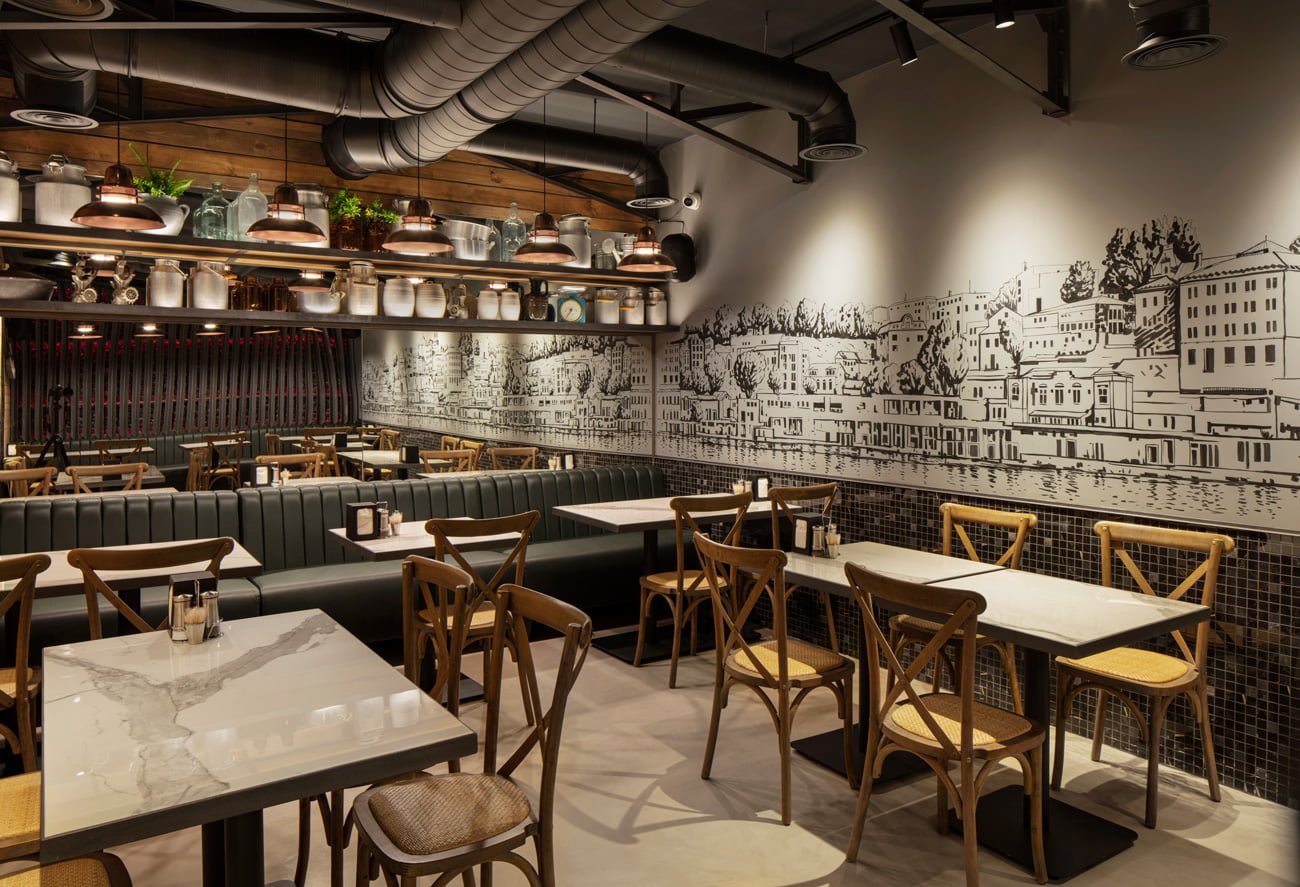 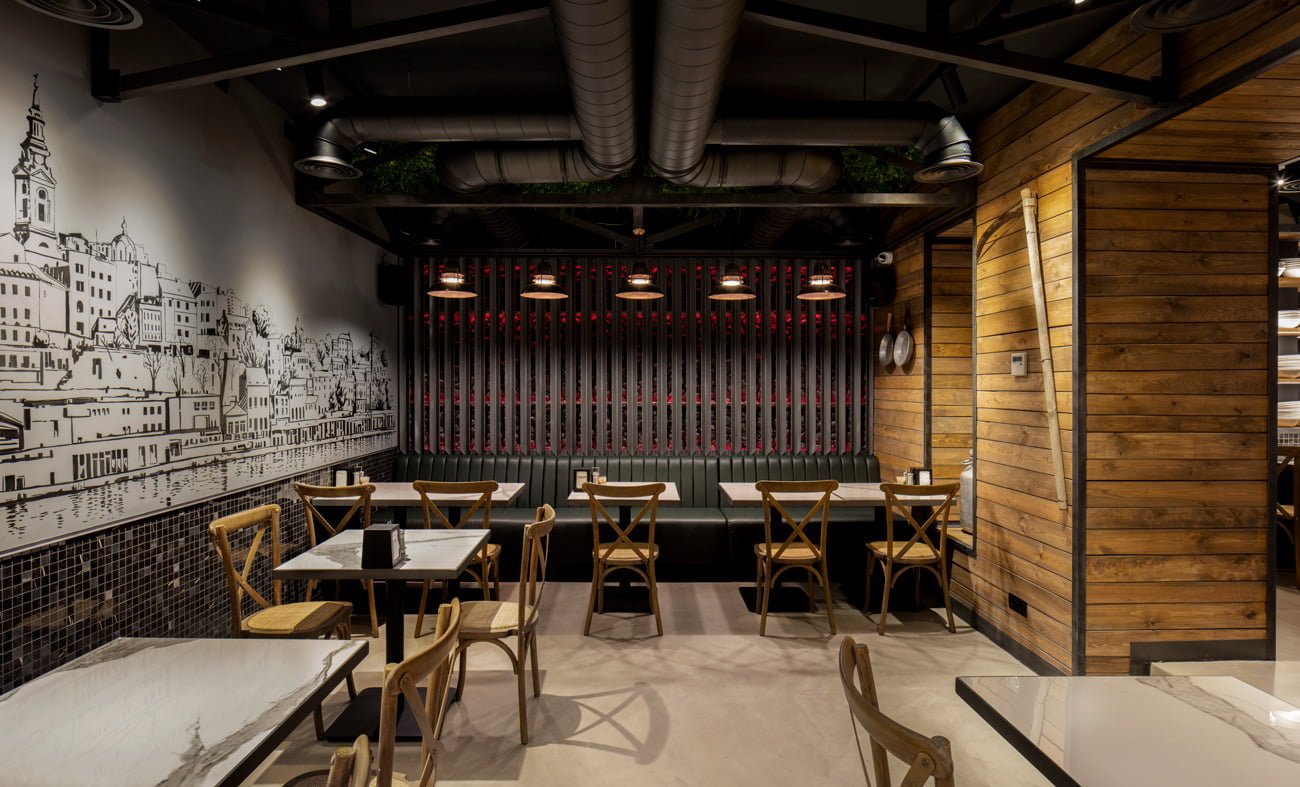 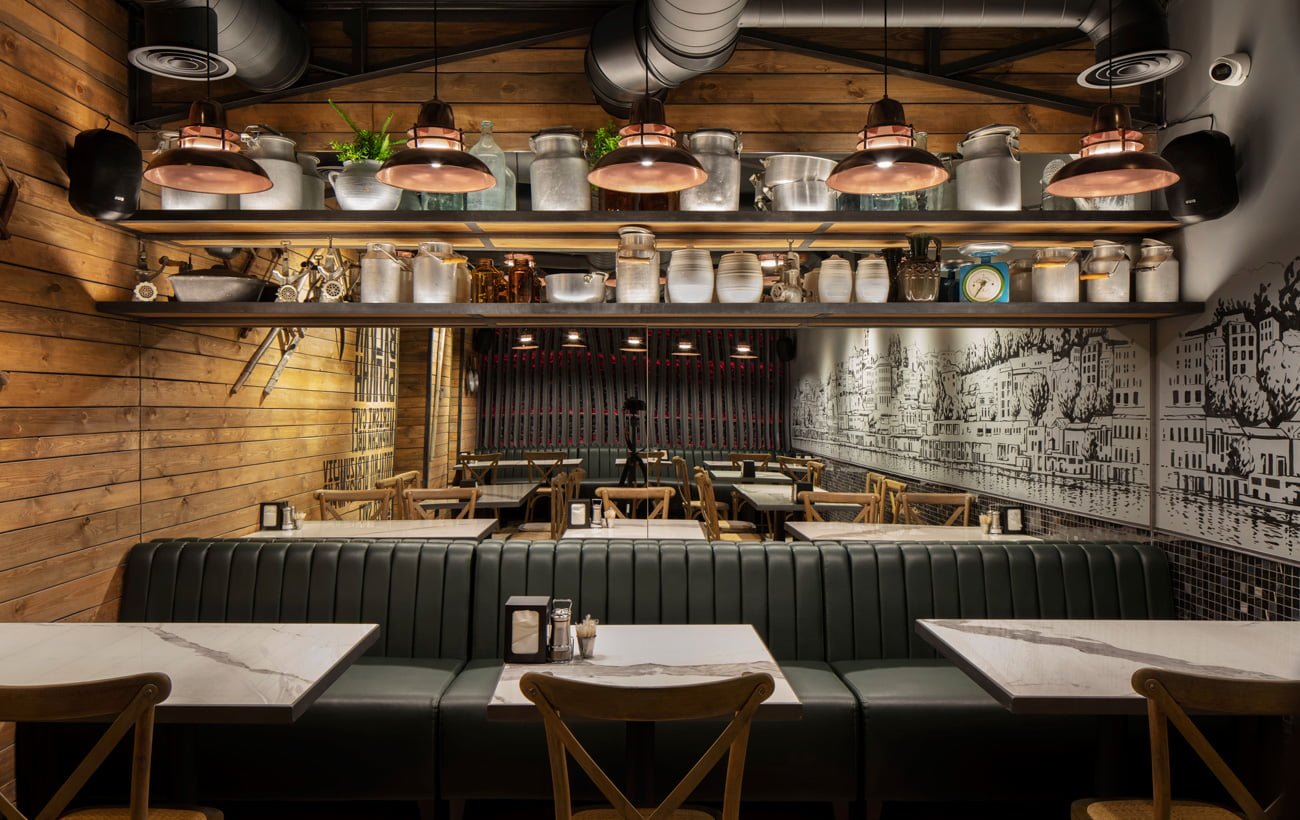 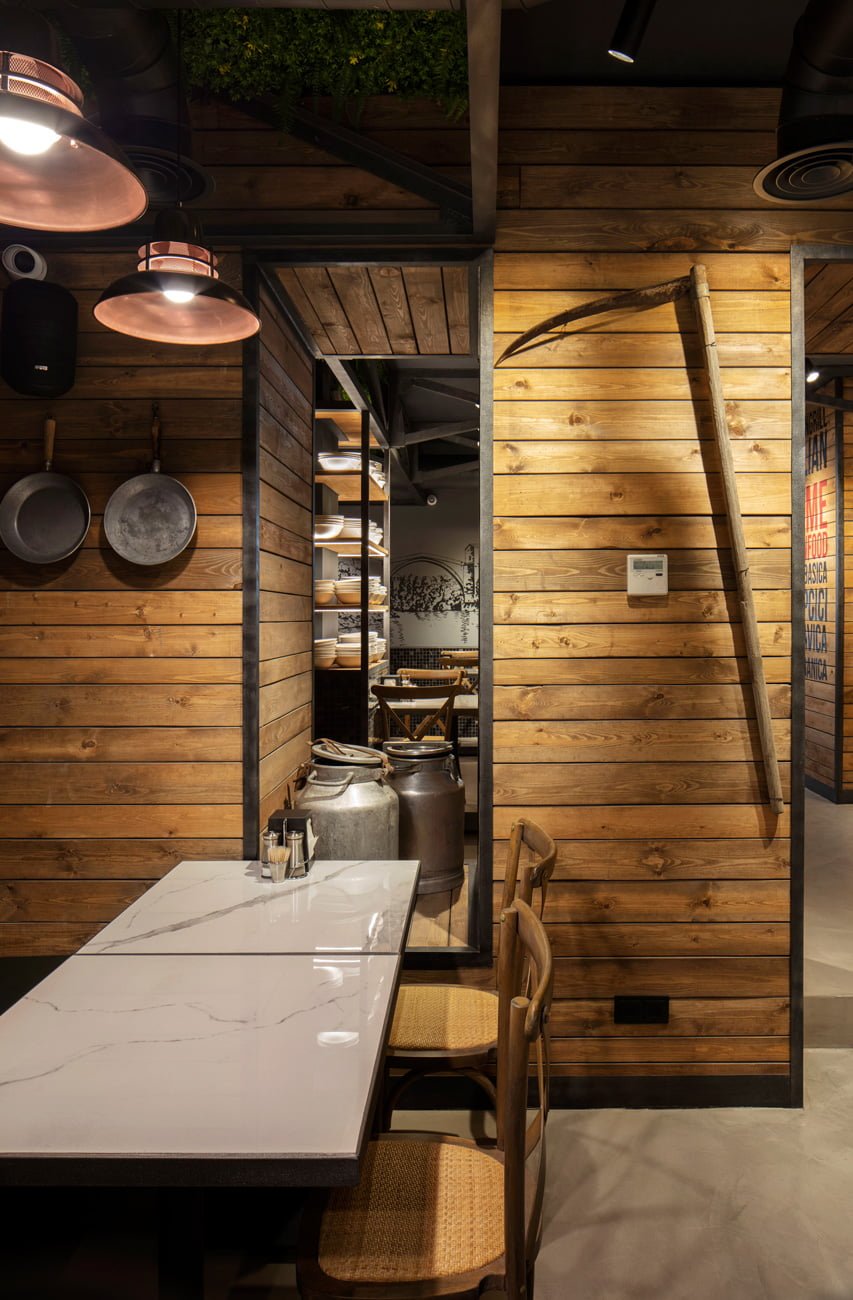 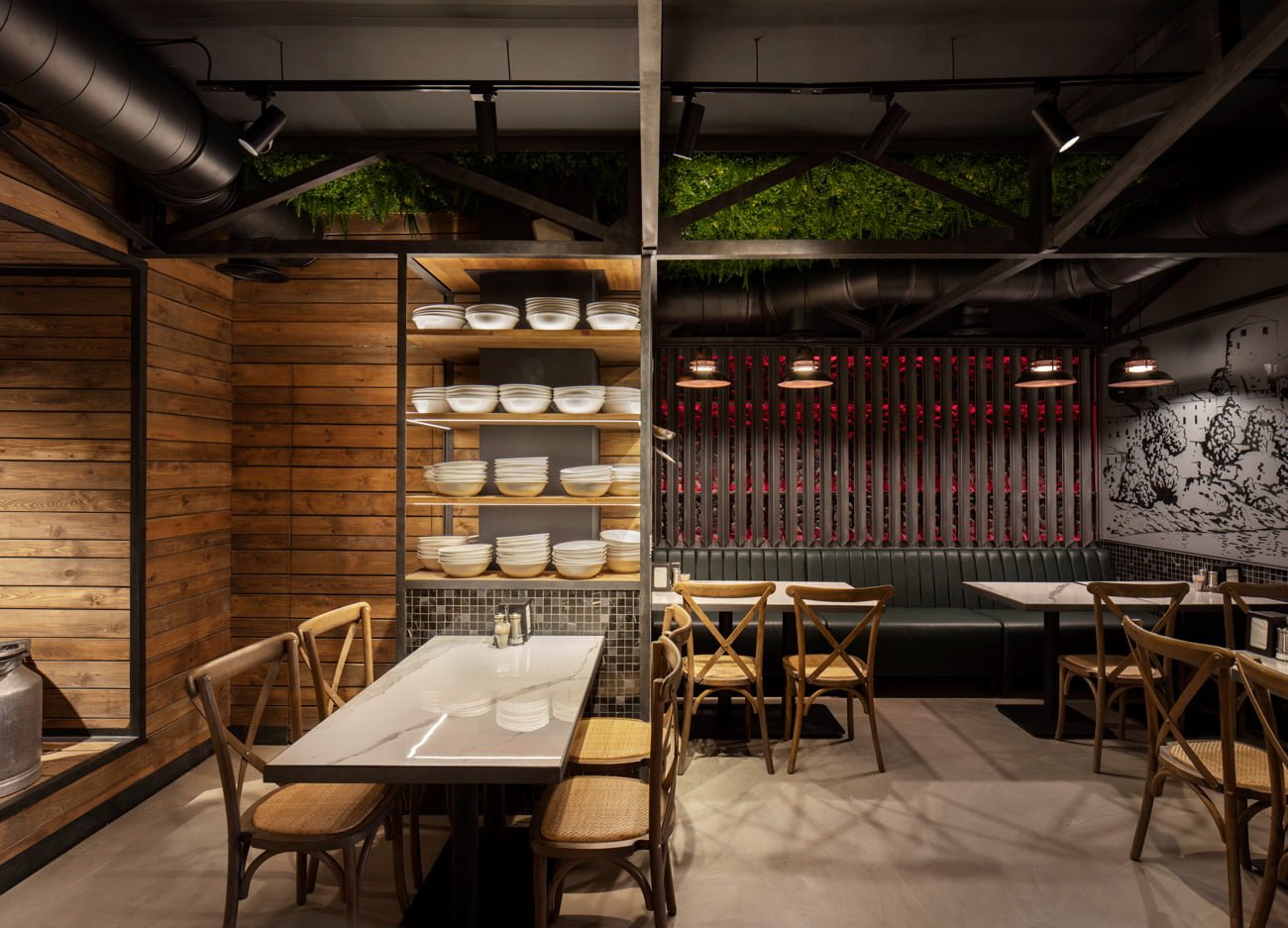 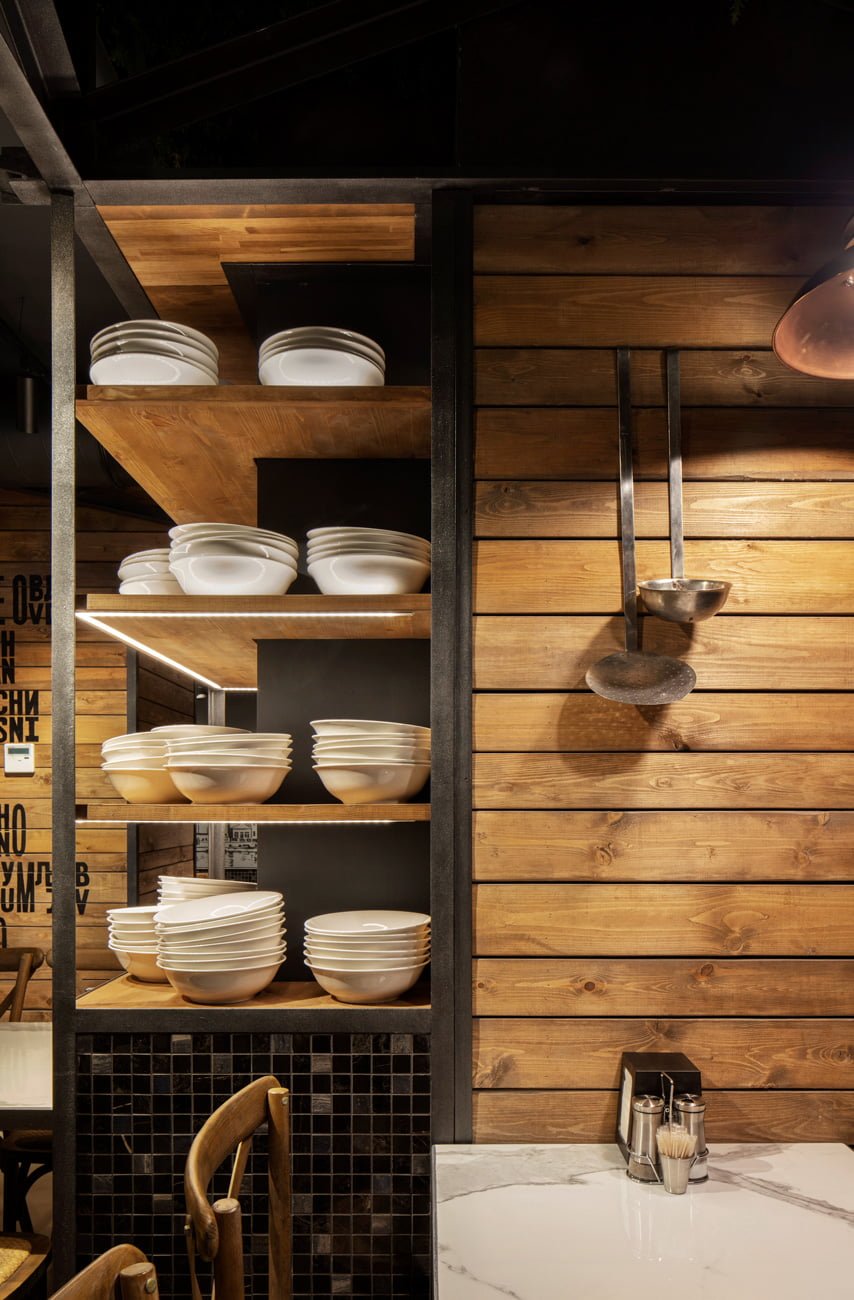 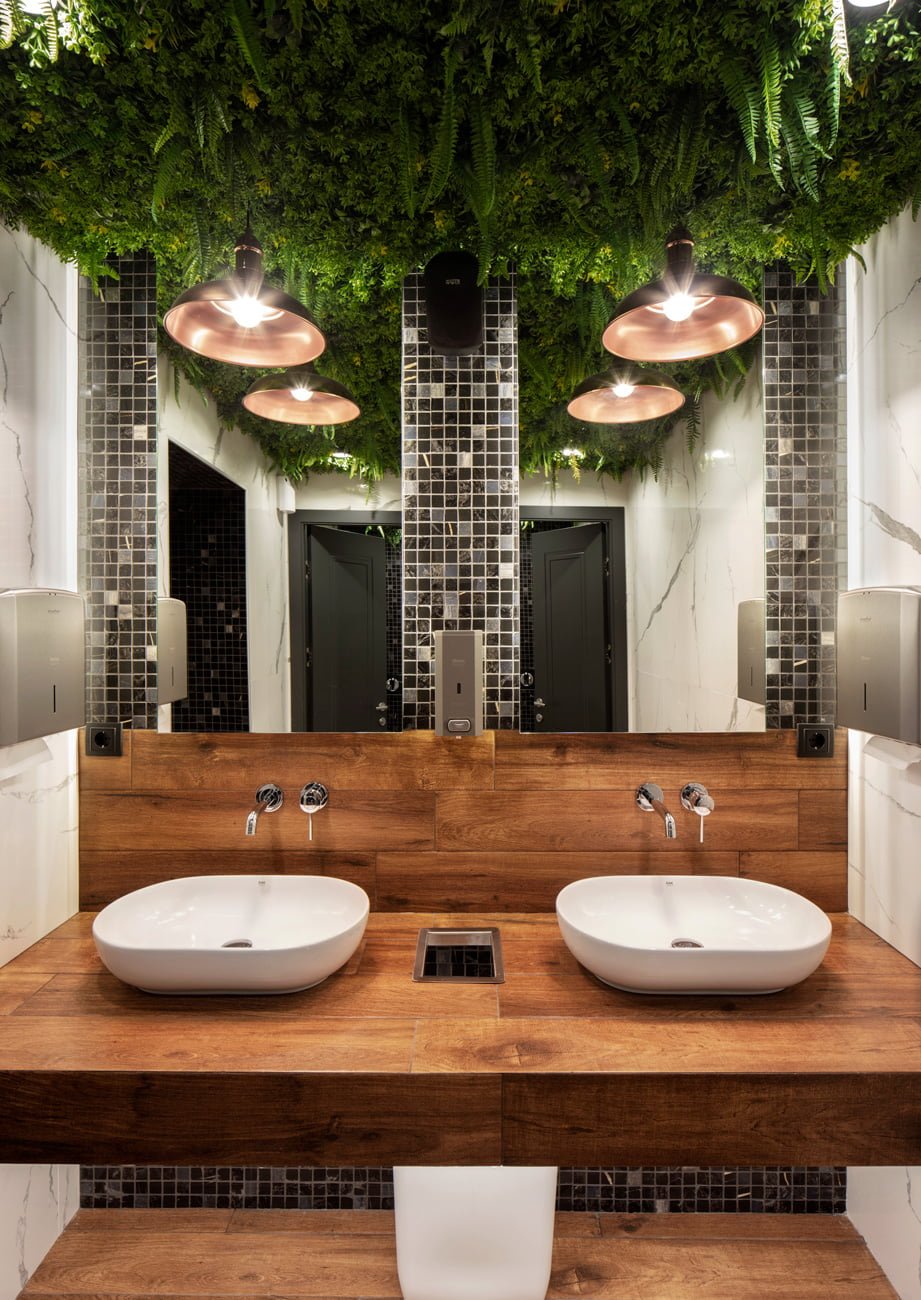 Project of a new restaurant with Balkan notes.

Lately, the Balkan notes have been added to all kinds of traditional and exotic scents on Tumanyan Street. GRILLIAN restaurant is a new interior design project from IMAGEMAN of the restaurant that was developed by Imageman studio with special attention to detail. The chosen concept of the restaurant in the diner format was harmoniously reflected both in the exterior and in the interior.

GRILLIAN restaurant interior diner format is a cross between a full-fledged restaurant and fast food. As a classic diner, the outside is absolutely “transparent” with huge glass facades. Design solution the main hall resembles a restored hangar with a massive ventilation system and stone walls. An open kitchen is located in the first hall, where the visitor at the entrance immediately sees the process of cooking meat. There is also a huge wood stove in which traditional Serbian bread is baked.

The lower part of the kitchen counter is decorated with a brazier-like decor with red illumination. Imitating hot coals under the gray railings. On the numerous shelves behind the chefs, jars with canned goods and preserves on the walls. They are not only to create the atmosphere of a country house. But also to use them in various dishes. Here a strong focus is placed on the red color, which immediately indicates the “meat” orientation.

Restaurant project design the second hall is made in the ethnic Balkan style. The walls of the hall are decorated with images of panoramas of various sights of some Yugoslav countries. On one, you can recognize Mostar with old castles in Kosovo and on the other a panorama of Belgrade.

The red color in the second room is quite shaded and is only presented in a similar imitation of a grill. But now on the wall. And the ventilation tubes here are already gray and do not take on so much attention. The rustic style or Country style of the interior GRILLIAN is reflected in accents. On-wall illustrations, wooden walls with inscriptions, aluminum utensils, and other atmospheric attributes. The furniture is as neutral as possible: the sofa seats are made of dark green leather. The chairs are wooden, the countertops are made of white stone. And even the lower part of the walls is lined with gray mosaics in order to emphasize the upper part of the interior new restaurant.

One of the creative solutions for achieving ethno style is old pots. Containers, ladles, and other metal utensils literally scattered throughout the restaurant.

If in the first hall there is the excitement of an open kitchen. The sounds of hissing meat on the grill, a bright red color that creates the atmosphere of street food. Then in the inner spaces, on the contrary, there is the coziness, comfort, and silence of a country house and the smell of grilled meat. These feelings are also achieved by wooden planks framed by metal beams that adorn the walls. And the massive writings on these wooden walls, as well as the old braids hanging on them. Are another remarkable design solution by the architects of Imageman Studio.

A  specially developed by a guest chef from the Serbia menu will not leave meat-lovers indifferent. Unfamiliar at first sight, the words “pleskavitsa” and “chevapachichi” have already become one of the most favorite delis of this place.

Architectural studio Imageman is already known in the market with its original and design projects for restaurants and cafes. They represent not only an individual approach to each client, but also offer the best options and solutions. If you decide to open a restaurant, Imageman specializes in A-Z projects of turnkey restaurants. From concept, naming, and branding, finding the most suitable location and spaces, to architectural plans. And interior design restaurants, kitchen furnishing, menu development, etc. IMAGEMAN will help you open a restaurant, find the best solutions, and develop a restaurant project in detail.